Ask for a quote! We have made it easy for you. Go!

ALL CAST PLATE ARE BORN EQUAL, SOME ARE MORE EQUAL THAN OTHERS

Aluminium cast plate  is well known to be the best material in mold making and prototyping. Its main characteristic is its dimensional stability to machining, especially with high speed lubloss CNC machining. This characteristic is due to its «isotropic» nature which means that the material will behave the same way whatever the direction as opposed to rolled material. It is intrinsic (central) to AA5083 alloy when properly heat treated to release the residual stress generated by horizontal DC casting.

When PCP Aluminum was created 13 years ago from, (a sell off of Pecheny), PCP decided to move the installations closer to the  Rio Tinto cast house foundries in Quebec Canada. This close proximity and brand-new fabrication equipment, gave PCP the opportunity to develop the best suitable alloy for cast plate applications.  All of this while focusing on the main target: dimensional stability as the key property. PCP Aluminium also kept in mind the other properties often requested by end users.

We carefully examined the properties of each available alloy to finalize our choice on AA5083. The AA nomenclature (American Association) ensures the customer that the chemical composition is guaranteed to be the same all the time.  From this high grade alloy (AA5083) PCP Aluminium created its high precision ground cast plate named Alca5.

We discard series such as 2000 series since they were more prone to corrosion and the difficultly involved in its recycling (due to its nickel or beryllium  and contamination from copper alloying)_. We also discarded 7000 series not being a food grade in Europe and because weldability and anodization require outstanding skills to achieve good quality level. Some 7000 series do not stand very well to laser cutting  as cracking may appear. Especially with tight cutting pattern lines.

Alca5 AA5083 is also known for exceptional performances in extreme environments. It is highly resistant to attack by both seawater and industrial chemical environments. It retains exceptional strength after welding. When welding to itself or another alloy from the same sub-group, the recommended filler metal is 5183. Other suitable fillers are 5356 and 5556. Furthermore, it is a food grade and it is very easy to anodize the parts to a nice decorative aspect. 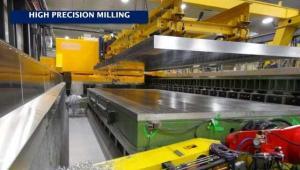 PCP Aluminium is totally committed to the production of premium cast plate. Our privileged access to premium DC cast aluminium sources guarantees you get a world class alloy made of prime aluminium.